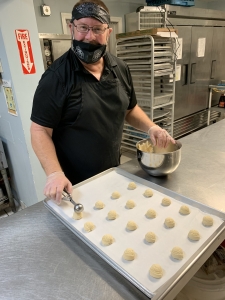 While The Source continues to expand their already successful programs and services, three of their Dignity Programs are making a leap into a new food territory.

At one time, baking was part of the Dining with Dignity program which provides training for homeless students in preparation for acquiring food-related employment within the community. That part of the program will be making a return visit soon, while The Source’s Kitchen Manager, Karlos Ayala, and new Pastry Chef, Rob Morrison, are baking, testing and planning ahead.

Additionally, selected baked goods are being added to the Dignity Food Truck menu…something new each week….and they are making quite a hit with the customers. Dignity Caterers are also including the new dessert items on their catering menu and have just recently unveiled the new catered desserts at a memorial service reception and an employee appreciation lunch at a local business.

Rob Morrison has been with The Source for a dozen years, working in several different capacities; most recently, as Employment Specialist. Rob attended a culinary school early in his career, and maintained a secret passion for the art of baking. His culinary skills became apparent to the team at The Source and it was suggested Rob take his passion for baking and make it his career. Dignity Desserts was born.

Morrison has a sparkle in his talk and his walk when he discusses his culinary creations, from simple sugar or chocolate chip cookies to a carousel of no bake peach, guava and oreo cheesecake cups recently served at a private function. His piece-de-resistance is a near secret recipe….his one-of-a-kind Banana Pudding Cheesecake.

In his spare time, Morrison is testing donuts, of all sizes and tastes, with a variety of toppings, flavors and fillings…hoping to try them out on the food truck and make Dignity Donuts his next endeavor. Who knows…one can only dream.

For more information on The Source, their catering program and the new Dignity Desserts, contact Executive Director Anthony Zorbaugh at 772-564-0202 or visit www.iamthesource.org.